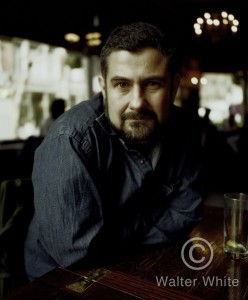 With a father who sold ladies’ underwear for a living, and an actress-turned-psychoanalyst for a mother, I suspect my life was never destined to follow a wholly conventional path.

After graduating from Cambridge University (with a history degree, a Boxing Blue and lasting eardrum damage from playing with thrash-metal band Meathead and the Turbohammers), I drifted through a variety of jobs and incarnations.

I very nearly joined MI6 (thankfully for national security I didn’t), worked as a gravedigger in France, sold cigars in Harrods and toured Europe as Aunt Sponge in a ground-breakingly execrable production of James and the Giant Peach.

Through it all, however, there have been two constants in my life – writing, and archaeology.

My professional writing career began with the Big Issue Magazine. As well as working as feature writer and film editor, I gained a cult following with my weekly In The News column (some of the columns were collected in my first published book, Death by Spaghetti). On and off I wrote for the magazine for seven years, and to my dying day will be grateful to founding editor John Bird (and editors Joanne Mallabar and Becky Gardiner) for giving me a chance to learn my craft. I doubt I will ever again work in such an edgy, chaotic, madcap and gloriously stimulating environment. And, more important, for a publication that actually does some social good. It was a very special education.

My work at the Big Issue spun off into a successful career as a freelance journalist. Among others I have written, and continue to write for The Guardian, The Independent, The Evening Standard, The Daily Express and CNN.com (I was staff at CNN for a while – another intensely stimulating, and intensely pressured workplace). You can check out just a few of my articles here.

Alongside the journalism, and occasionally overlapping with it, I have worked extensively as a field archaeologist, particularly in Egypt.

I can date the beginning of my obsession with archaeology to a Monday morning in July 1972. That was the day my aunt Joan took me to see the Tutankhamun exhibition at the British Museum. I remember queuing for hours, badly needing the toilet, wanting to go home, and then being completely mesmerized by the treasures on display.

After that I carried out extensive excavations in our back garden in North London in the hope of discovering something similar (I didn’t), and became a dedicated Mudlark (people who go digging along the banks of the Thames).

In 1998 history came full circle when I was invited to work with the Amarna Royal Tombs Project – the first expedition to dig new ground in the Valley of the Kings since the discovery of Tutankhamun (in 1922). 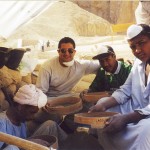 We spent four years exploring the central part of the Valley, and also re-excavating Tomb KV56 – the so called “Gold Tomb”. I supervised this re-excavation and have the dubious honour of having discovered the only items of pharaonic jewellery to have been found in the Valley since Tut. You can find out a bit more about my work in the Valley of the Kings here.

Archaeology and writing (and, also, a passionate interest in current affairs and the politics of the Middle East) combine in the four novels I have published to date. These have now sold over two million copies, been translated into thirty-three languages, and published everywhere from Korea to Brazil, Latvia to Thailand.

What else? I’m married to a (brilliant) documentary producer-director; I ride a Vespa; love scuba diving (when I get the chance); am happiest wandering round a museum, or trekking in the Sahara, or, best of all, hunting trolls in the woods with my sons. I lecture in creative writing, and go into schools to talk about ancient Egypt (most of the kids seem to know a lot more about it than I do!) I am passionate about education, green issues and Tottenham Hotspur. Among my favourite writers, the ones to whom I return over and over, are Iain Banks, Ian Rankin, Mervyn Peake, Naguib Mahfouz and Charles Dickens. My Ipod contains just a little too much Bob Dylan.