The Labyrinth of Osiris

At once both gritty police procedural and edge-of-your-seat archaeological thriller, The Labyrinth of Osiris reunites reluctant friends Yusuf Khalifa of the Luxor Police and hard-nosed Jerusalem detective Arieh Ben-Roi, protagonists of Sussman’s universally acclaimed and internationally bestselling second novel, The Last Secret of the Temple.

Since they last met, life has moved on for both men. About to become a father for the first time, Ben-Roi finds himself investigating a gruesome murder in Jerusalem’s Armenian Cathedral. When a link emerges with an English engineer who mysteriously disappeared from Luxor in 1931, Ben-Roi turns for help to his old friend and sparring partner Yusuf Khalifa.

Khalifa’s life too has changed, although in his case not for the better. Preoccupied with personal troubles and immersed in an investigation of his own – a series of unexplained well-poisonings in Egypt’s Eastern desert – he agrees for old time’s sake to do some digging for his Israeli colleague.

Inexorably their investigations entwine, drawing Ben-Roi and Khalifa into a sinister web of violence, sex-trafficking, corporate malpractice and anti-capitalist terrorism. And at the heart of the web lies the Labyrinth – a three-thousand year old mystery that for one detective will bring redemption, and for the other tragedy.

The Labyrinth of Osiris is a sweeping, stunningly-written, edge-of-your-seat mystery that will keep you guessing right up until the very last page.

‘As well as teaching us a lot about our world in general and the Middle East in particular – the integrity, friendship and self-sacrifice as well as the cruelty, prejudice, the corruption of power and money – Paul Sussman’s final novel is as thrilling an archaeological adventure as you’re likely to read: wildly exciting, brutal, expertly informed and utterly unputdownable.’ 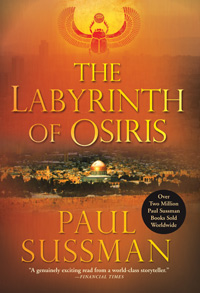 For more reviews of The Labyrinth of Osiris READ HERE.